Is the DMG Entertainment series the next Game of Thrones ?

Is the DMG Entertainment series the next Game of Thrones ?

DMG Entertainment series  – With Game of Thrones set to end in just over a month’s time, fans will quickly want to replace their feelings of sorrow with anticipation for another epic fantasy drama to get their teeth into.

DMG Entertainment acquisition of the “Cosmere” universe created by author Brandon Sanderson, could provide the answer.Known as once of the biggest literary universes ever created, there are multiple characters and storylines which could make for compelling TV..

There are so many different strands to his works that each one could have its own TV series. However, there are two early contenders to become the first books to be converted into a TV franchise the size of Game of Thrones. 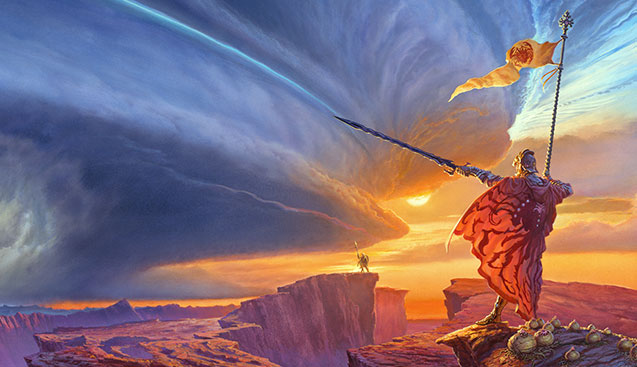 The adventures that take place over the several books of The Stormlight Archive could form and excellent basis for a successful global TV series.

Originally, touted by DMG as a movie franchise it quickly became clear that the stories are too complex for the silver screen.What will have encouraged DMG to put the brakes on a movie production and push forward with a small-screen adaption is the run-away success of fantasy adventures such as Game of Thrones.

Sanderson’s stories evolve in a similar fashion to the HBO blockbuster, with several different character storylines running concurrently across the vast continent of Roshar.

The stories are told through contrasting wars and sub-plots, which build slowly and are not yet slated to finish for another decade at least according to the author Sanderson.

Only 3 of the 10 volumes have thus-far been released which means other adaptions of his books look more promising, such as Mistborn.

Also taking place in the Cosmere, the Mistborn series has far more complete material to work with. In fact, Sanderson has written two huge trilogies set on the Mistborn world of Scadrial set across two “eras”.

The story follows the allomancers, magicians who can swallow certain metals and use them as fuel for superpowers, including telekinesis.

The first trilogy takes place in a dystopian medieval-style world, where an evil dictator has ruled for over 1,000 years, crushing peasants and controlling the economy.

The second series takes places 300 years later with the planet Scadrial on the verge of modernity.

Mistborn may present a better basis for a television series, since the trilogies are both vast, complete, and separate.

What this means is there is enough material to make a multiple season show based on just the original trilogy, which could then be followed on by the more modern Wax and Wayne series at a later date should the show take on Game of Thrones proportions.

What About Other Sanderson Works?

There is further potential for more Game of Thrones-style TV series provided by Sanderson’s other worlds in the Cosmere such as: Sel, Nalthis, Taldain, Threnody, and First of the Sun.

Most of these have only been partially developed or introduced, but it gives you some idea of the sheer scale of the Cosmere universe.

In fact, it is highly likely that despite being prolific, Sanderson may well have passed on before all of his planned future works have been finished. A fear many thrones’ fans know all too well as George RR Martin enters his 70s with multiple books left to write.

How Will DMG Entertainment  Bring It All Together?

A pertinent question on many Sanderson fans’ lips.

The worlds created in the Cosmere are a lot more tenuously-linked that say the comic book universes of DC, Marvel or even DMG’s other property Valiant.

There are only tied together by a shared use of magic and a few other tidbits that only the most well-versed fans would pick up.

Therefore, it is likely that these works will be brought to our screens independently, possibly with support from disparate production companies and television networks.

Will this set up make the overall Cosmere less coherent? Possibly. But as argued above, each book series is so vast that it is highly unlikely that one TV network such as HBO could commit to exclusivity so early on.

The other issue is lack of finished volumes. This is particularly the case with The Stormlight Archives because each book is told from a different character’s perspective. Can you imagine Game of Thrones taking place with only 3 main character storylines?

With at least 7 more volumes to follow this could prove tricky to provide continuity, unless they deviate from the books à la Game of Thrones and morph into their own interpretation of events, with general direction given from Sanderson himself.

Overall, Sanderson’s work could quite easily foster one (if not many) serious contenders to replace Game of Thrones as the number one fantasy adventure TV show. However, there are multiple stumbling blocks that need to be considered before anything moves forward.

How can a TV network link together such a huge universe such as the Cosmere? And what do they do about the fact that one of the main overarching stories won’t be finished for at least another decade?

Whatever happens, let’s hope they make a start on one of these many possible TV projects and hire writers, directors and producers to get the ball rolling on what could be the biggest fictional universe ever created!