Most Kickass Marvel Antiheroes of All Time

Marvel took a lot of its fan by surprise with the announcement of Phase 4 of MCU. As Marvel fanatics around the globe mourn the departure of Robert Downey Jr’s Ironman and Chris Evans as the iconic Captain America, a slew of new heroes and antiheroes come in to fill the void left empty by these towering personalities.

While the usual array of heroes has attracted a massive fan base over the years, it’s the antihero faction that has garnered an unexpected following and spurt in their growth, both at the box office and among critics. This could partially be due to the more human demeanor of antiheroes who cave into their emotions and desires, unlike the ever so perfect heroes. Antiheroes are people who go above and beyond to achieve their goals, even if that leads to chaos and destruction all around them. And unlike superheroes who believe in live capture of their enemies, antiheroes prefer to end it once and for all, without any remorse. 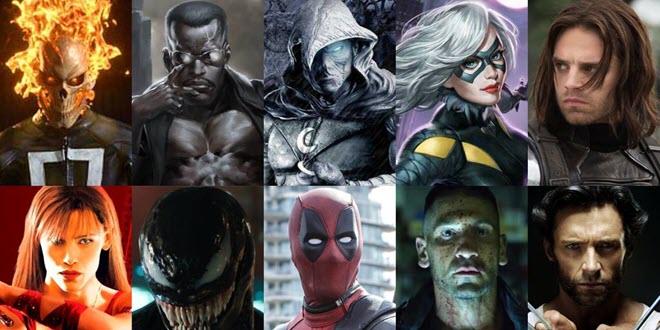 And surprisingly enough, the announcement of a Blade movie starring Mahershala Ali as the protagonist and a possible reboot to the Ghost Rider franchise has left many excited for the future of Marvel’s Cinematic Universe. More and more games are also including these antiheroes as their demands are rising. You can check out fun games like leovegas blackjack if action games are not your cup of tea!

Here are some of the most kickass antiheroes from Marvel’s stables that have made us question our staunch support for the righteous hero faction.

No other name in the entire Marvel multiverse screams kickass like Deadpool who needs no introduction. The mercenary with a big mouth is a much-loved character for the audience and a pain in the ass of anyone he is in close proximity of.

This masked crusader with the face of a mashed potato goes by the name Wade Wilson and is an insanely powerful antihero, thanks to his immortality, super strength and a twisted sense of humor. Deadpool does not shy away from committing questionable acts as long as he gets paid and is a freelancer who just happens to team up frequently with the likes of superheroes. We can only expect the popularity of this comical character to soar as Ryan Reynolds is doing a phenomenal job as Deadpool on screen.

A half vampire who hunts vampires with a slew of high tech blades? Count us in. Blade is a marvel antihero who is committed to his cause of wiping off evil undead blood suckers from the face of this earth and does not tolerate anyone coming in his way. Although he protects the innocent from vampires, his methods are filled with bloodthirsty violence and a sense of darkness. Blade has teamed up with multiple heroes and organizations over time and is an expert swordsman and a very skilled combatant. This combined with his vampire powers like super strength, super agility and faster healing make him a deadly and dangerous antihero who is only going to get better as the character is soon to get a revival and will be played by Mahershala Ali in Phase 4 of the MCU.

A demon inhabiting the body of a mortal human is the perfect recipe to a Marvel Antiheroes. Ghost Rider, the Hell’s bounty hunter is also known to the world as Johnny Blaze and is a powerful being that goes beyond the boundaries of this world. He derives his power from Gods themselves, putting him a class above most of his peers and his enemies. As a punk skeleton with leather overalls who is on fire, Ghost Rider sure makes for a deadly antihero who believes in serving justice to his prey, no matter what the consequences on others.

The Punisher is not your run of the mill Marvel Antiheroes with mind boggling super powers. In fact, he has none. Frank Castle is one of Marvel’s most popular antihero and for good reason. A war veteran and an ex-Marine Corps personal, he relies on his brute strength that is very human, and his expertise in dealing with various arms and ammunitions along with his skilled tactics. The Punisher is a man on a mission who went berserk after his family was murdered by the mafia. His thirst for revenge and oath to eradicate villains makes him a force to reckon with. The Punisher does not hold back and more than willing to kill his opponents or the people who come in his way. What makes this character truly kickass though, is the fact that he has sparred with and defeated many enemies and opponents, from both sides of the spectrum who were far superior than him in strength. No wonder The Punisher TV series is such a big hit with the masses!

Magneto is almost always portrayed as the villain in most X-men comics and movies, but he is not a true villain since his motives and ambitions are based on the welfare of mutant kind rather than his selfish means. For mutants, Magneto is an activist who wouldn’t mind destroying humans to make the world a better place to live for his kind. He has also done a whole lot of good for his friends, especially Charles Xavier and even led the X-men against Apocalypse when they needed him.

One cannot talk about X-men and leave Mystique behind. The only female character on this list, Mystique is a true antihero who has been switching sides since she was introduced to the world. A trained actor, expert at combat and with weapons, a multilingual strategist, assassin, spy, ability to resist and negate the effect of toxins and diseases are some of her great abilities. But these are not even her main quirks as a mutant. She is a shapeshifter who can take any being’s form just by looking at them. This makes her a force to reckon with and a truly kickass character who does not mind taking lives and whose intentions cannot be determined precisely even though she is affiliated with the good guys for quite some time now.

Venom has had multiple hosts but is mainly associated as the alter ego of Eddie Brock. This symbiote from another world latches itself to a human host and elevates their core emotions in an unstable and dangerous manner. While the basic nature of Venom is extremely violent and evil, it has been juggling between opposite spectrums and has an affinity to protect innocent people under its affiliation with Eddie. The evil guys and criminals who face venom often face a gruesome death and are either sliced to pieces, cut wide open or simply eaten alive. Isn’t that disturbingly kickass?