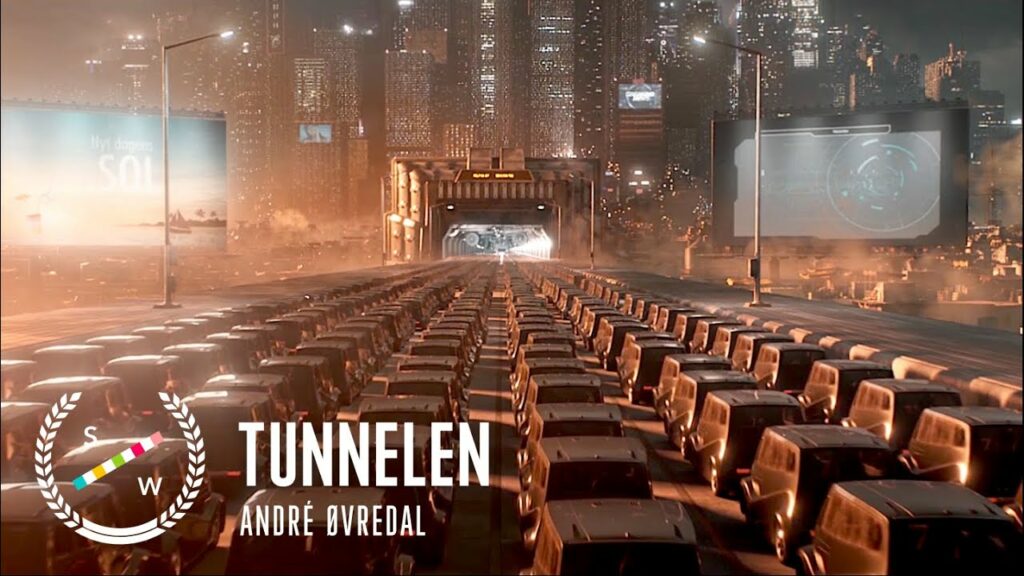 From director André Øvredal (Trollhunter, Scary Stories to Tell in the Dark) an acclaimed sci-fi/horror short film. In an overpopulated future, a family returning from a day at the beach have to travel through a tunnel that serves a deadly second purpose.

Based off a classic short story by Alice Glaser, “The Tunnel” was the recipient of the “Méliès d’argent” awarded to Europe’s top genre films.

“Browsing the Sci-Fi channel on Short of the Week, I’m always impressed with the level of ingenuity that goes into the storytelling and world-building in these genre shorts. From intergalactic quests for long-dead Earth cuisines to pioneering mind transfer procedures, the seemingly limitless opportunities for narratives in these universes makes these films some of the most exciting and much-loved shorts we feature on our site. With its high-concept premise and surprisingly relatable narrative, Tunnelen (The Tunnel) by Troll Hunter director André Øvredal is another fine addition to our science-fiction collection.

Initially, the premise for The Tunnel doesn’t seem as exciting or visionary as the aforementioned films, as a story following a family on a car journey back from the beach doesn’t feel like prime fodder for a futuristic fable. However, set the trip in an overpopulated world, where drastic, indiscriminate action is taken to reduce the number of its inhabitants and suddenly you’re presented with a dystopian vision that turns a mundane commute into a tense and gripping watch.

The method of population reduction is the titular tunnel – described as ‘Depopulation without Discrimination’ in Alice Glaser’s original short story The Tunnel Ahead – which seemingly shuts every so often and eradicates all those trapped within. Though Øvredal’s reimagining doesn’t include the level of backstory as Glaser’s, which importantly provides context as to why a family would go through the tunnel in the first place, it ramps up the tension and feels like an even more condensed and frantic version of this terrifying tale.

“I loved the way the short story used an extreme science fiction situation to talk about a very normal family situation”, the director explains as we discuss why he decided to bring Glaser’s story to the screen. “The parents need to have “adult” conversations, things they need to hide from the children, while in a very tense environment. It felt both real and scary”.

Aiming to create a film full of suspense, featuring only a family sitting completely still inside a car, Øvredal shot The Tunnel in a green screen studio in Oslo, with everything outside the car (even the road) added digitally afterward. “We only had one car”, he reveals as I ask about his production methods, adding that they “constructed the car like a 4 piece “cake” so we could pull out sections of it to access with the camera”.

Setting his film within a futuristic vehicle certainly doesn’t limit the scope of Øvredal’s film. Though I bemoaned it for not having the same level of backstory as Glaser’s original tale, there are subtle nods (the father eying a fellow traveler’s drink, the graffiti on the rear of an advertising board) to the larger world beyond. And ultimately, although the film doesn’t explain why they risked their lives for a short trip to the seaside, not having it spelt out for you leads your imagination down some dark and twisted paths. I mean, just how bad must their lives in the city really be?” – S/W Curator Rob Munday