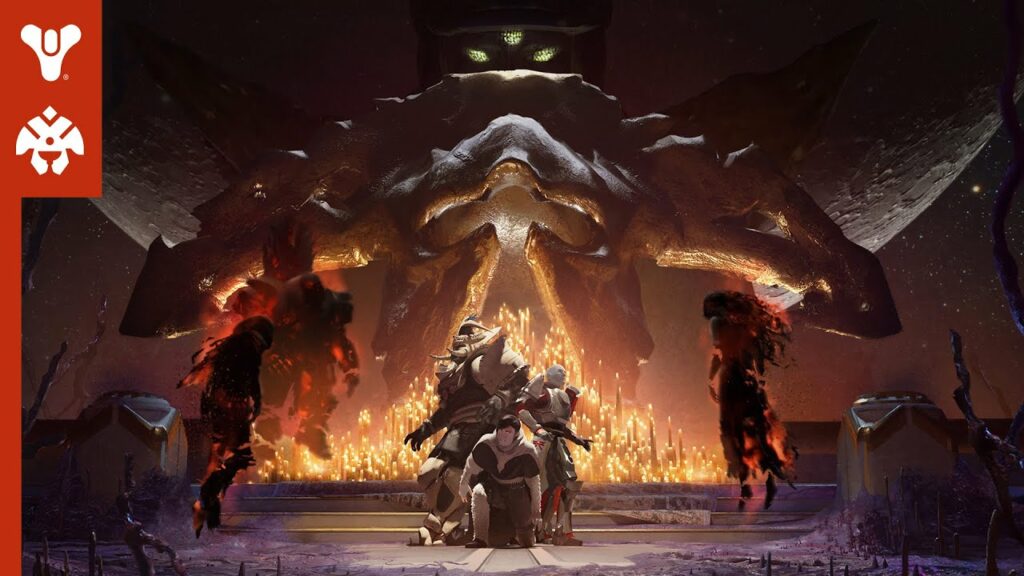 Driven by an insatiable lust for power, Calus seeks the approval of a new master. His once-opulent ship, now derelict and corrupted, has returned to our galaxy—its sights set on the power promised by the Pyramid ship lying dormant on the Moon.

As the Leviathan forms a connection with the Pyramid, Nightmares of humanity’s past awaken and threaten to torment any who dare intervene. Stare into the abyss and find bravery within the mantle of the reaper and the steel of the scythe.

Destiny 2, also known as Destiny 2: New Light and referred to as Destiny: Guardians in Korea, is a first-person shooter video game developed by Bungie that can only be played online and is only available to play for free. It was initially distributed as a game that required payment to play on PlayStation 4, Xbox One, and Microsoft Windows in the year 2017. It utilised the games as a service model and became free-to-play on October 1, 2019, under the moniker New Light. This was followed by the game’s release on Stadia the following month, and then on PlayStation 5 and Xbox Series X/S platforms in December 2020. Activision was the publisher of the game up until the 31st of December, 2018, when Bungie became the new owner of the publishing rights of the franchise. It is the sequel to the game Destiny, which was released in 2014, as well as any following expansions to that game.

The game takes place in a setting described as “mythic science fiction,” and it incorporates a multiplayer environment referred to as a “shared world,” as well as elements of role-playing games. Player versus environment (PvE) and player vs player (PvP) are the two categories under which Destiny 2’s activities fall, much as they were in the first game. In addition to the standard campaign tasks, the PvE mode also includes three-player “strikes,” six-player dungeons, and raids. There is also a free roam patrol mode accessible for each destination, which features public events as well as activities that were not present in the first game. The original Destiny primarily included non-player characters (NPCs) in the game’s social spaces; these new activities, on the other hand, put an emphasis on both exploration of the locations and interactions with the game’s NPCs. There are objective-based game modes available in PvP, in addition to the more standard deathmatch game variants.

Players take on the role of a Guardian, guardians of the last safe city on Earth, and wield a power referred to as Light in order to defend humanity against a variety of alien races and face off against the impending danger posed by the Darkness. Expansion packs, similar to those found in the first Destiny game, allow players to progress the narrative and unlock additional content across the board. Curse of Osiris and Warmind were the two smaller expansions that were released for Destiny 2 in its first year. Forsaken, the game’s third and largest expansion, kicked off the second year of the game with a fundamental change to the gameplay. Year Three officially begins with the launch of the upcoming expansion, Shadowkeep (in October 2019). Shadowkeep and upcoming releases are considered to be standalone releases, and thus do not require players to own any prior premium content in order to access them. Alongside the launch of the fourth expansion for Destiny 2, a new free-to-play version of the game called New Light was also made available. This version of Destiny 2 granted players access to the original game as well as the first two expansions. Additionally, individual seasonal passes could be purchased in order to access the material of each season. Although the primary Destiny 2 game is now playable without cost, all of the additional content must be purchased in order to access it.

Nearly half of the game’s content from its first three years, including the original base campaign as well as Curse of Osiris and Warmind, was removed from the game and placed into what Bungie refers to as the Destiny Content Vault during Year Four, which was the year that saw the biggest overhaul on the game. Year Four saw the biggest overhaul on the game. Along with this transition, the beginning of Year Four also marked the beginning of the fifth expansion, titled Beyond Light, which gave players access to the power of Darkness. Because it will be followed by The Witch Queen in early 2022 and Lightfall in early 2023, Bungie referred to this expansion as the beginning of a new era for the franchise. In addition to Lightfall, there will be a concluding chapter known as The Final Shape that will come after it. This chapter will bring the first saga of Destiny, known as the “Light and Darkness Tale,” to a close before the start of a new saga.

After it was made available to the public, Destiny 2 was met with mostly positive reviews from critics. The changes that it has made have received a lot of praise, notably in reference to its initial tale, as well as its gameplay, aesthetics, exploration focus, multiplayer, and public events. The reclassification of the weaponry, the Leviathan raid, and the new game types were met with mixed reception from critics. The video game Destiny 2 was nominated for multiple accolades and took home some of them, including those presented at The Game Awards 2017 and the Game Critics Awards.

FOLLOW BUNGIE:
Facebook: https://www.facebook.com/Bungie/
Twitter: https://www.twitter.com/bungie
Instagram: https://www.instagram.com/bungie/
⠀ ⠀ ⠀ ⠀
Dive into the free-to-play world of Destiny 2 to experience responsive first-person shooter combat, explore the mysteries of our solar system, and unleash elemental abilities against powerful enemies. Create your Guardian and collect unique weapons, armor, and gear to customize your look and playstyle. Experience Destiny 2’s cinematic story alone or with friends, join other Guardians for challenging co-op missions, or compete against them in a variety of PvP modes.