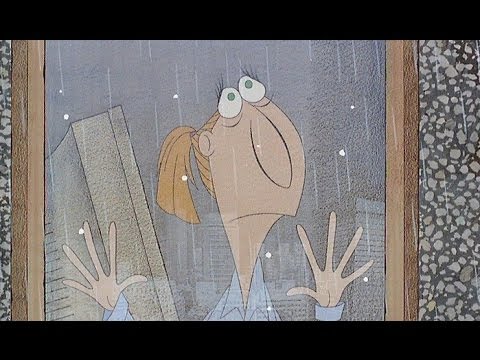 U.K. / 2011 / 19’37” / HD / CC subtitles – English, Francais
http://www.thelastbelle.com/ The Last Belle is an award winning 2D animated short film, featuring the voices of Sienna Guillory, Colin McFarlane and Amanda Donohoe, and directed by Neil Boyle. The film was created using ‘old-school’ technology: 35,000 hand-drawn and hand-painted pieces of artwork, shot directly onto 35mm film with a rostrum camera, to achieve a traditional ‘cartoon’ feel. For much more behind-the-scenes info and a link to our blog please visit http://www.thelastbelle.com/ Thanks for watching, and please ‘Like’ us or leave a comment.

ABOUT ‘THE LAST BELLE’
The Last Belle is an animated short featuring two characters journeying towards a blind date: WALLY, who suffers a nightmarishly drunken trip through London as he races against the clock to the rendezvous; and ROSIE, who waits in a bar dreaming of how wonderful her date is going to be… if he ever shows up.

Although the film is set in contemporary London, the techniques used to bring it to life hark back to the ‘golden age’ of animation, with over 35,000 individual pieces of artwork drawn, painted and photographed painstakingly by hand.

For the production process Director Neil Boyle assembled a team of veteran and younger film artists who enthusiastically swapped their skills and knowledge, with the aim of keeping alive older techniques, while also lending them a modern edge.
The Last Belle features the voice talents of Sienna Guillory (The Time Machine, Resident Evil), Colin McFarlane (The Dark Knight, Torchwood) and Amanda Donohoe (Castaway, L.A. Law). The music is by award winning composer Stuart Hancock.

Neils says of the process: “I came into the animation industry on ‘Who Framed Roger Rabbit’ and at 20 years old I was one of the youngest there. I was lucky enough to learn from the Disney veteran Stan Green (who had been assistant to the legendary Milt Kahl on many classic Disney films) and I became assistant animator to Richard Williams who was (and remains) amazingly generous with his vast knowledge of animation lore and technique. I was in the middle of all this, the archetypal kid-sponge, sucking up all the information I could. And then one day I went to bed and woke up 40 years old. Or so it seems. Then I was surrounded by a new wave of 20 year olds who – unlike me at that age – were already masters of their craft: the digital age of animation. So I had (and have) a lot more learning to do.
‘The Last Belle’ is the project I’ve used to bridge the gap between old and new. A chance not just to read about the ‘old ways’, but to try them all out for real, guided by veterans of the craft.The interesting next step is to combine the old with the new and see where it takes us…”